J R Carpenter on A Picture of Wind

In my submission for the Dot Award I proposed to create a new web-based (tablet compatible) piece called This is A Picture of Wind. This work will expand upon a short text written in response to the storms which battered South West England in early 2014, resulting in catastrophic flooding in Somerset and the destruction of the seawall and rail line at Dawlish. Following the news in the months after these storms, I was struck by the paradox presented by attempts to evoke through the materiality of language a force such as wind which we can only see indirectly through its effect. I began to explore weather, and wind in particular, in all its written forms. I have been collecting language pertaining to wind from current news items as well from as older almanacs, private weather diaries, and past forecasts held at the Met Office Library and Archive in Exeter. I am also studying classical ideas of weather. For example, Lucretius writes: “The wind burst open the cloud, and out falls that fiery whirlwind which is what we in our traditional language term a thunderbolt.” This award would help me develop a simple yet stable web interface to combine these diverse archival and classical materials with my own quotidian narrative of the storm events of early 2014, live weather data and maps, and text scraped from Twitter. I do not know yet exactly what form the final work will take, only that it will attempt to address climate change by picturing through language and data the absences left by wind. 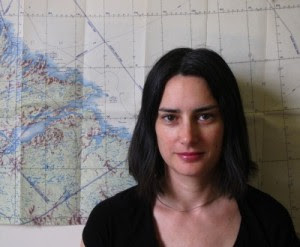