The New Media Writing Prize has been running for five years now, and if:book has been involved since the start - when the prize was an iPad, a magical new invention then.
This year the award event, held at Bournemouth University and hosted by James Pope who set up the prize, was a special treat with a panel of Kate Pullinger and her two collaborators on the amazing Animated Alice, Chris Joseph and Andy Campbell. Chris is a big remixer and music maker, Andy runs Dreaming Methods and The One to One Development Trust, makers of stunning 3-D story worlds.

The winner of the New Media Writing Prize 2015 is High Muck A Muck, a Canadian site, and a visual and aural delight, an interactive poem documenting the lives of the Chinese community members.

The High Muck A Muck Collective are: Nicola Harwood, Fred Wah, Jin Zhang, Bessie Wapp and Thomas Loh  The People’s Prize was won by two.5 for Recollections: 12 Vignettes of Lashihai two.5 are Viccy Adams and Samantha Silver The Student Prize went to Shaun Hickman for Kindred - See more at: http://newmediawritingprize.co.uk/?p=1190#sthash.8xoLiZOL.dpuf

This year we launched the DOT AWARD FOR DIGITAL LITERATURE, in memory of my mum, writer, designer and struggler with new technology Dorothy Meade. A prize of £500 plus any advice and support we can offer goes to the writer of a proposal for work to be completed within the year and showcased at the next award ceremony.
And the winner is.. J.R. Carpenter 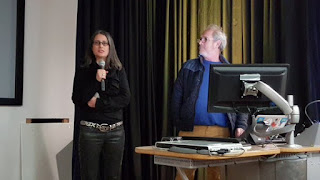 J.R makes stunning digital literature. City Fish is a favourite of mine, and all can be seen on her site www.luckysoap.com. The proposal was for a new piece about the wind and the weather.. I don't want to say too much about what is work in progress, but we're confident it will be brilliant.  For more information go to the New Media Writing Prize site. 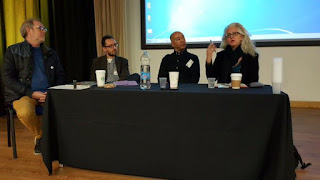