THE DOT AWARD and other if:book NEWS - Autumn 2015


IT’S A PICNIC
Made by if:book with the highly talented Jerwood Arvon mentored writers over one week this summer, read our tasty literary picnic at WWW.APICNICHAMPER.BLOGSPOT.COM
If:book has been working with the Arvon Foundation since this wonderful scheme was set up, making new kinds of work with the novelists, poets and playwrights chosen each year. 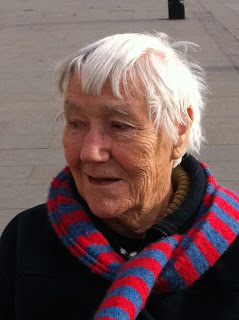 IF:BOOK LAUNCHES NEW
‘DOT AWARD’ FOR DIGITAL WRITERS
We’re delighted to announce  the launch of The Dot Award, a new annual prize sponsored by if:book UK for a writer of fiction, creative non-fiction or poetry using the web in imaginative and collaborative ways.  It will be awarded alongside the £1,000 NEWMEDIA WRITING PRIZE which is run by Bournemouth University and supported by if:book UK.

The prize is £500, support from if:book uk in developing your idea, and an invitation to speak at the 2017 New Media Writing Prize ceremony (via Skype if overseas) about how your work has developed since receiving the prize.

The prize will be awarded for a project idea which in the judges’ opinion shows promise and practicability – it should be a project that we can see being developed, completed and functional by the end of 2016. We are looking for projects which don’t need to be technically complex but do create original and exciting literary work inspired by the affordances of the web, blogs, apps, social media etc. if:book UK will liaise with the winner to support the project.

The Dot Award is in memory of writer, designer and silver surfer Dorothy Meade.

The judges are Chris Meade, writer and founder of if:book, artist and play designer Hattie Coppard, teacher Jo Klaces and George Palmer, Head of Communications at the Arvon Foundation.
The deadline is the same as the New Media Writing Prize, i.e. Friday November 27th 12 noon GMT

IFSO POETS
This summer if:book was at the South Bank Centre for the celebration of the 50th birthday of Modern Poetry In Translation, throwing poetry darts and handing out poetry cigars and canapés. Thanks to Mekella Broomburg for joining Chris to dish out the verse. Here’s one we threw earlier. 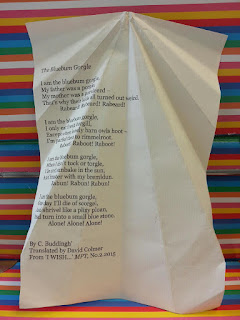 Chris has been concentrating on his PhD in Digital Writing at Bath Spa University. He’s writing a transmedia novel about how we embody the things we've nearly done, and that’s involved writing songs, holding workshops with a dancer, a theatre director and writers, training in Flash Animation and working with puppet maker Bee Peak. He now has a first draft, an app developer involved. He’s looking for places to run Nearly Workshops, gather stories and present the work in progress. Nearly Days have happened in cafes, pop up shops, conferences and festivals.
MORE DETAILS AT WWW.NEARLYOLOGY.NET 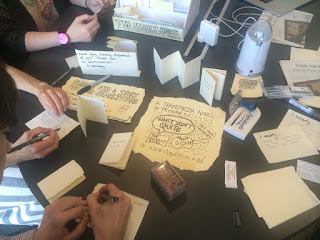 If:book’s first Collaborative Writer in Residence Luke Roberts has recently become a father and has moved with his wife Sally to Bath where we’re hoping to make more literary things happen in the future. Luke convened the IFSO Writers group and devised a role play game based on 1984 during his residency. Congratulations to Luke and Sally, and welcome to Leo!

THE HORNSEY LIBRARY COFFEE HOUSE has closed.
Run by artist Robin Stevenson and set up with support from if:book, the café was a hub for local writers and led to the forming of a Philosophy Learning Circle and the Hornsey Songwriters Collective which both still thrive. Robin’s moved to Brighton to work at a new venue there. We wish him well.

THE IFSO STUDIO
At our base in London N8 we hold occasional writing workshops and salons on literature, playfulness and collaboration, have a selection of books and merchandise for sale. And the IFSO VAN can come to you. We also rent out a small cottage in Suffolk suitable for writing retreats.
Contact chris@ifbook.co.uk for further details.

WWW.IFSOPRESS .COM is the home of a fantastic collection of collaborative writing. Visit the site to find good things to read by established and emerging writers, and links to much more.