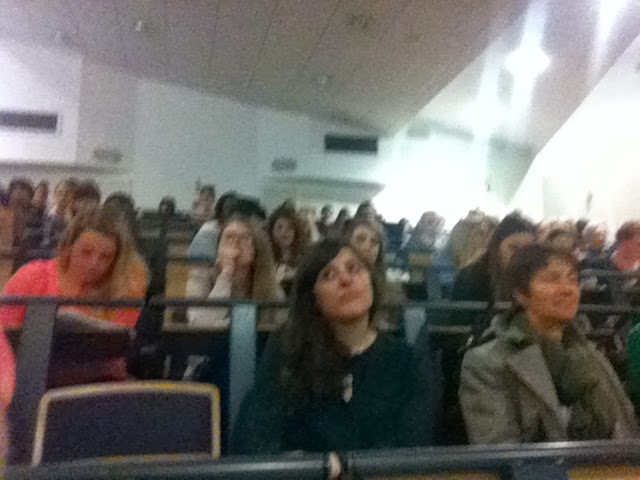 Audience members at the NMWPrize

"
SIRI&me is a new genre of storytelling extracted and conveyed solely across-social-media platform.  A combination of reality TV and sitcom, SIRI&me proposed a new form of entertainment in the form of a  Tumblr  ,  Facebook  and  Twitter  account.
SIRI&me "aired"  every weekday at noon EST on Tumblr, rerun on Facebook at 5PM EST and was advertised daily via Twitter. From September to November 2013, the project gathered organically more that 1,500 followers across social media platforms.
Each episode consisted of a screenshot of a real conversation between iPhone’s Siri and the phone’s owner, Esmeralda.  Organized in three seasons of ten episodes each, the virtual sitcom investigated the complex relationship humans have developed with technology and the increasing presence of the Internet of Things in the physical world  through the evolving friendship of its two characters – Siri and Esmeralda. Together Siri and Esmeralda ponder the important matters of life: love, death, their dreams and fears.
SIRI&me breaks the norms of social media and TV by introducing a new form of entertainment.  More than a simple transposition of TV content onto the web, it aims at translating its codes and practices into a virtual space, the social media world.
Watch all 3 seasons here.