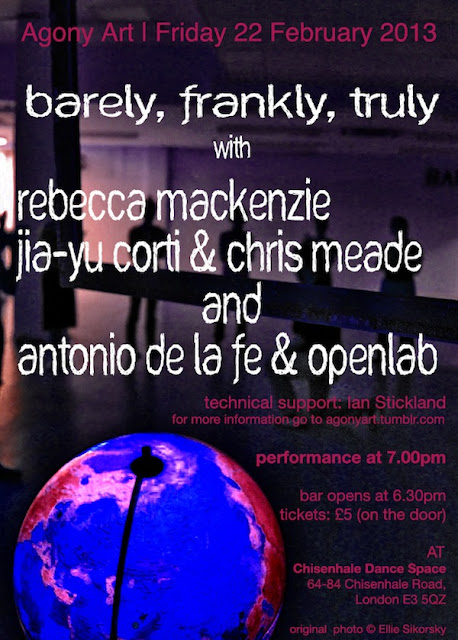 My amazing mum died in December so this is a sad and transitional time. Normal service will be resumed soon, but meanwhile here's a reminder of what if:book's been up to lately.

I started 2013 by appearing on the Radio 4 debate on Cultural Exchange with Mark Lawson.
What a shame mum missed that - she would have been impressed and reassured that my work involves more than drinking coffee and tapping on a laptop.

The award ceremony for the New Media Writing Prize run with Bournemouth University, covered by the Independent and Bookbrunch. Shortlist and winner can be seen at www.newmediawritingprize.co.uk

The first Literary Salon at Loughborough University organised in partnership with Writing East Midlands and the University publishing course.

Chris worked with poet in Inua Ellams on a Twitter poem for National Poetry Day. Inua has written about it for the blog and Set Poetry Free;

gave a seminar on if:book and Nearlyology at the Royal College of Arts for the MA in Critical Writing in November;

ran an if:book stall at the Literary Platform’s Writers Platform at Rich Mix, Hackney in November

spoke at the Folkestone Literature Festival panel on authors as publishers;

was interviewed in STRUCTO magazine issue 8;

wrote a contribution for the Looking for the Heart of English national discussion on English teaching;

is the official Nearlywriter in Residence at Hornsey Library;

was a participant in the British Library Digital Futures event in December;

is speaking at the Heart of English event at the Royal Society of Arts;

is a judge of the 2nd Bologna Children's Bookfair Digital Award 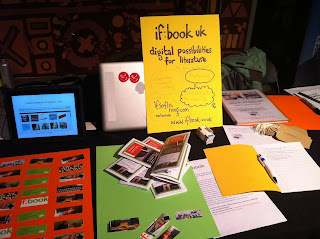 if:book stall at the Rich Mix event run by the Literary Platform 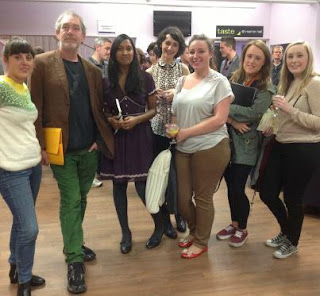 I'm a juror once again for the Bologna Children's Bookfair digital award.
Here's how to enter:


Dear Children's Digital Publisher;
I am pleased to announce the 2nd Annual BolognaRagazzi Digital Prize, an effort to put a spotlight on innovation and excellence in children's digital publishing, on a global level.
WHO SHOULD ENTER? Publishers large or small who make ebooks, or apps that have story driven ideas. See last year's winners http://youtu.be/QJuqwsX0rWc(as video) or here in print: http://bit.ly/10wxGs3
DEADLINE: Enter on or before February 8, 2013

ENTER ONLINE: It takes about five minutes. Use this form http://goo.gl/yBrwY
ENTRY FORM IN ENGLISH: http://bit.ly/ACt3lI
ABOUT THE PRIZE: The prize is in its second year. This year there will be two winners and four honorable mentions in two categories, fiction and non-fiction. The award is open to all publishers and developers in any language or platform, of apps made for children between the ages of 2 and 15 years old. It is free, and open to any publisher.
Learn more: http://childrenstech.com/bolognaragazzidigital
GENERAL BACKGROUND: The contest is called the BolognaRagazzi Digital Award, and it is integrated with the BolognaRagazzi prize for printed books.
http://www.bookfair.bolognafiere.it/en/boragazziawardigitale
WHO CHOOSES? The winners are selected by an impartial http://www.bolognachildrensbookfair.com/boragazziawardigitale/giuria_digitalepanel of experts. There are four jurors; three from EU, one for the USA.http://bit.ly/V1SH7H
HOW DO I REGISTER? Use this form: http://www.bolognachildrensbookfair.com/en/boragazziawardigitale/form_digitale
IS THERE A COST TO ENTER?  No. We will ask for five download codes.
WHAT TYPES OF PRODUCTS ARE YOU LOOKING FOR? Apps or other forms of interactive media related in some way to to children's books (adoptions of, or inspired from). They must be current, published within the past year.
WHEN WILL THE WINNERS BE ANNOUNCED? On the first day of the fair, which takes place in Bologna, Italy from March 25-28, 2013.
ABOUT THE BOLOGNA CHILDREN'S BOOK FAIR
The Bologna Children's Book Fair is the most important international event dedicated to the children's publishing industry. In Bologna, authors, illustrators, literary agents, licensors and licensees, packagers, distributors, printers, booksellers, and librarians meet to sell and buy, find the very best of children's and interactive media production, generate and gather new contacts while strengthening professional relationships, discover new business  opportunities, and discuss and debate the latest sector trends.
For further information:
Bologna Children's Book Fair - Piazza Costituzione, 6 - 40128 Bologna
E-mail: bookfair@bolognafiere.it

water in pembrokeshire - coming back from a new year creative retreat
Posted by Chris Meade at 23:09 No comments:


I was delighted to be invited to be on the panel of Radio 4's discussion on The Cultural Exchange yesterday. For a while at least you can hear it on iPlayer HERE. I'll blog more about it soon.