Introductory piece for the 2012 Jerwood mentored writers anthology to be launched this June alongside a digital sampler made by if:book UK 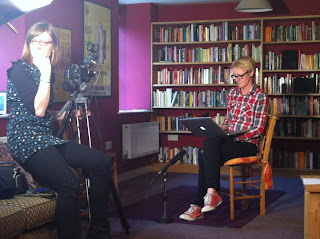 It was far-sighted of the Arvon Foundation in 2010 to commission if:book UK, my think and do tank exploring the future of the book, to work with the Jerwood funded batch of writers being mentored to become writers with a future.

The first group of nine took some persuading that there was any merit to producing a digital sampler of their work alongside the print anthology, perfect bound with ISBN number, which they saw as the real goal of their year. If:book associates film maker Sasha Hoare, artist Toni Le Busque and I travelled to the Hurst to win them round with a presentation about past if:book projects and our mission to explore digital possibilities for literature.

Sasha’s intelligent and beautiful short films, Toni’s inspired animations and digital inventiveness soon won them round and over the next two days we established the pattern we’ve used since, interviewing each author and forming ideas with them on how a short segment of their poetry, prose or script could be illuminated via digital means for a micro-site linked to the Arvon website, completed on our return from the Hurst.

That first year I remember suggesting we think about how the sampler might look on one of those new iPad thingies that had just come out.
One year later on the train to Shropshire, half the carriage seemed to be reading on Kindles or using their laptops to read, work or view movies on. The second year’s intake of writers were more swiftly won round. They could see the benefits of having a clip as a trailer of their work to send to publishers or producers. Another year on and iPads, iPods and Kindles abound; everyone knows we’re in the midst of digital revolution. Writers take email, google and now kindles for granted yet most still keep one foot firmly in the analogue and an eye fixed on conventional publishing goals.

Meanwhile the work of Arvon becomes ever more valuable. No longer is the assumption that only a few will use courses and workshops as a springboard into ‘proper’ publishing; all are Nearlywriters now, able to amplify whatever they write to a critical readership of some kind and bound to benefit from the skills honed at weeks away amidst the amazing creative landscapes these centres provide.