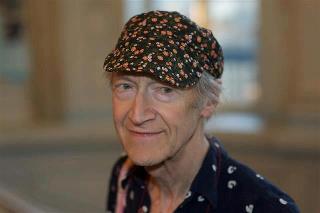 Poet and poetry activist Michael Horovitz had a birthday last week and that prompted me to upload this interview and wish him many happy returns.

My Dad and I went to the launch of the Grandchildren of Albion at the ICA in 1969. I was thirteen.
This was the Penguin anthology edited by Michael Horovitz and featuring wonderful poets including Pete Brown, Miroslav Holub, Adrian Mitchell and many more. When I was Director of the Poetry Society in the 1990s, Michael was a regular visitor, always dissident, challenging but also supportive, pushing a basket on wheels which contained the flyers and anthologies which fuelled his alternative society of Superjams and Poetry Olympics. We had a very public spat on the Today programme re the supposed million quid deal given to Murray Lachlan Young which Michael objected to as commercial exploitation and I saw as optimistic news for the potential earning power of poets. We didn't really disagree much, but it was a joy to watch Michael seize the time to have his say on national radio. Later I took my son to see Michael's Albert Hall POW! event where Damon Albarn and Ray Davies sang Parklife and Waterloo Sunset and later signed autographs for Joe and I.
The poets were good too.

And I interviewed Michael last summer for the Young Poets Network project - or rather I tried to hold the flipcam steady while he spoke to me - about childhood, William Blake, Beat poetry, the Wholly Communion event on 1965, why he is NOT a Sixties Poet.. and much more. The final short clip says everything I'd hoped and more about the potential for digital poetry happenings of the future.

I'm delighted to see that the Poetry Olympics are happening again this summer at the South Bank, apparently at the same time as some sporting event. Here are the details:

As the Olympics come to London, join us for an unrepeatable evening of poetry, performance, music and song. Tickets £12/£10 are now on sale via the Southbank Centre (including a limited number of Concessionaries @ half-price) Queen Elizabeth Hall, Southbank Centre, London SE1