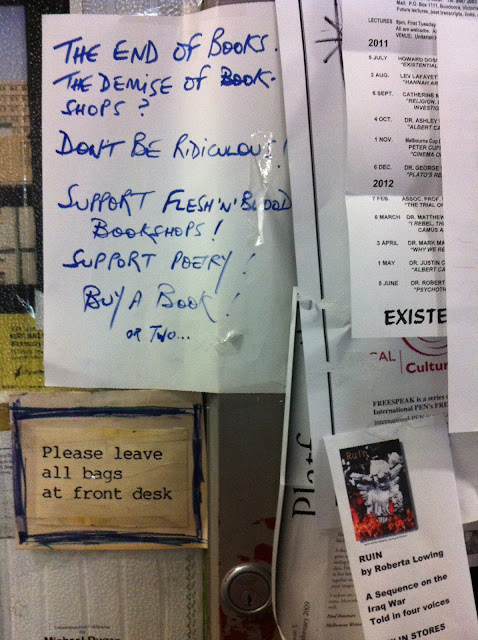 notes in the window of Collected Works poetry bookshop, Melbourne.

In the run up to Christmas 2011, Lisa spoke to representatives of twenty literature organisations and small publishers across England, asking them about …

1. one digital literature initiative, product or service that they're pleased with or has made a positive impact on their work, or on the people who interact with them/their organisaion.

2. one issue or challenge their organisation faces related to digital technologies and literature.

Where organisations had tackled technology head on, they found it made a massive difference, both in terms of what they could do, and what they felt capable of doing.

Colin Brown of Poetry Can described how “we used to be in thrall to the people who designed our website. So we've rebuilt our own site so we have total control over it, we can change anything to do with it. We started from scratch & learned as we went along. Getting our heads round digital platforms has made everything else more possible.”

The Reading Agency’s Reading Groups for Everyone, which boasts a membership of just under 2,500 groups – a potential audience of around 25,000 – has, in Ruth Harrison’s words, “had a major impact on our profile, increased awareness of and participation in the work we do with publishers. It’s enabled us to showcase what we do.”

Several independent publishers mentioned that the digital change that’s made the most difference to them was the introduction of digital printing, which has made smaller print runs more economic. E-books, on the other hand, are still something of a struggle, even for the technologically savvy. Emma Barnes again: “eBook creation still feels like a new technology that no one's really cracked. I think it's because the majority of publishers outsource their ebook production to someone else - often a someone else who's happy to throw cheap labour, rather than clever technology, at the problem. It means there's not much of a market for easy-to-use, robust eBook creation and conversion tools”.

And Ross Bradshaw of Five Leaves Press: “we have started producing eBooks. The three produced so far (all backlist) haven't sold well. We've got about another ten going up on kindle and other platforms by the end of the year, so we'll see. I'm wondering if it'll be a waste of time!”

A number of interviewees mentioned skills development – specifically the need to get to grips with the technology – as a major challenge. Henderson Mullin of Writing East Midlands said “The biggest challenge is resources, skills and knowledge. It's such a fast-changing environment it's had for a literature development organisaion to keep abreast.” An informed understanding of the various open source web platforms like Wordpress, Joomla and Drupal and eBook formats, together with a basic grasp of coding would prove immensely useful. And, as Charles Beckett of Arts Council England said, individual writers benefit hugely from: “Understanding what it [digital technology] can do, who it’s for and where it fits in.”

Other major challenges are the perennial bums-on-seats and funding issues. For Chris Gribble at the Writers’ Centre Norwich, “it’s about finding effective ways of engaging audience with online activity. It's looking at how to augment events and programme digitally in a way that has integrity. Jonathan Davidson of Writing West Midlands asks “how do you monetize activity that ends up being experienced on digital platforms? The filters for traditional analogue experiences – books and events – allowed for capital transfer. How do you take that online?” Ruth Harrison echoes his theme: “How do you pay to keep the work going? There are lots of areas we haven't got into yet: like crowd funding…”


if:book uk is planning a series of ifsoflo events around the country to help literature organisations continue to explore digital possibilities for literature.
Contact us if you're interested.
Email Post