the magic of reality - review


The Magic of Reality iPad App 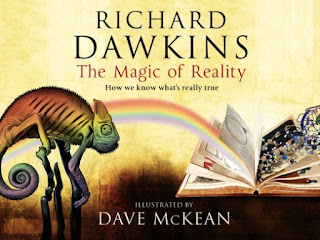 Reviewed for the Literary Platform

The Magic of Reality by atheist almighty Richard Dawkins is an excellent concept beautifully executed: to present genuine scientific fact alongside the myths and legends which humans have created to help them explain the inexplicable before science found out more. So while it celebrates the narrative power of these ancient tales, Dawkins emphasizes that what actually happens is always more exciting and… well, true.

App and book mix illustrations by Dave McKean based on stories from many cultures with infographics explaining how rainbows work, what earthquakes are and even why bad things happen and where we came from. Personally I’d have like more images direct from the cultures he discusses, rather than re-rendered by McKean, but he covers an amazing range of styles and animated touches. Between each chapter is a little game to play, for instance involving firing a cannon out of the earth’s atmosphere. The game element seemed a bit daft to me, but the app version is very slick, with nice typographical tricks. As you swipe from page to page, sometimes the text moves and pictures remain, sometimes it’s the other way round. Animated touches are elegant and the app format is especially good at showing scale – push the slider and watch the earth shrink away into pinprick insignificance alongside the sun.
The Magic of Reality is aimed at older children and the general reader. As a book it’s the kind of tome I might have been bought for Christmas by a scientific uncle, would flick through sometimes and read odd bits of, but would seldom read from start to finish. That’s partly because of my shallowness, but also in part because of the difficulty of heaving a hefty hardback about or propping it up in bed. The iPad allows us to handle highly illuminated text as easily as a light novella. But once downloaded, time will tell how tempting it is to revisit Uncle Richard’s box of appified tricks for further exploration. With no connection to the web, no space for note taking or social reading, this is the book transferred to tablet, not transformed by it. There’s still something strangely old fashioned about these lavish, coffee table apps, Boys Own annuals for the digital age, as sleek and as enclosed as ponies in paddocks.