Last weekend I went to Poole to chair a panel at the new literature festival there. The panel discussion was the opening act leading up to the announcement of the winner of the first New Media Writing prize, set up by festival Director Sue Luminati (whose surname I covet).  The panel involved Neal Hoskins of Winged Chariot, Chris Stevens, maker of the astounding Alice for the iPad and Maureen Scott of Ether books, purveyors of short stories for the iPhone. It was a fruitful session I thought and hope audience members agree. Here were three practitioners who have come from very different starting points to make books for i-Gizmos. Chris was a journalist, Neal a 'conventional' publisher, Maureen "occupied the mobile content space", and their work is all high on my list of favourite book apps. The conversation was about how to make brilliant digital literary works and why, and it took place in relation to the work of new media writers many of whom have been using the internet as a creative publishing tool for years, without reference to the book world at all. There are challenges for all as these worlds draw closer. The quality of writing online comes under scrutiny as the literati pile in, and

And the winner was... Christine Wilks for her moving narrative about a woman sculptor and the ghosts of the colliery she carves above. Chris is someone who has worked hard in this field for a long time, perfecting her flash and narrative skills both as part of the trAce community developed by Sue Thomas and, more recently, as a fellow student with me on the first two years of the now defunct Creative Writing and New Media MA at De Montfort. She's a regular contributor to www.transmedia.com and one of a small group of digital artists who remix each others' work at www.remixworx.net

It's a bigger step than one might imagine to bring together these tribes. Web writers have avoided mainstream publishing on purpose and tend to resent the traditional literary types getting in on the act.
Book publishers arrive online determined to recreate a familiar world of tomes for sale on albeit digital shelves. But the mingling has begun, and it's what really interests me about the future of the book.

MEANWHILE I've been sent this photo of Jose Furtado and I at the Calouste Gulbenkian in Lisbon recently, Jose looking far better dressed and more eminent than I - but then he is. 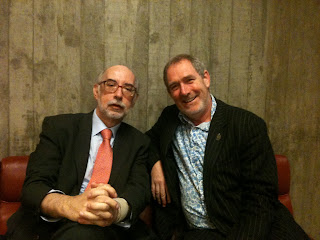