Thanks to poet Klare Lanson for spotting this exhibition, based on a notion similar to HOTBOOK , our school's project (which we're eager for feedback on for our final report!)

A solar flare wipes the world's electronic media stores clean. Electricity no longer flows. And a new dark age begins, along with a new form of storytelling. It's all chronicled in a strange art show from the future.
Artist Stephen Hendee's new show, Dark Age Era North America: The Ice Next Time, is on display right now at Las Vegas' Barrick Museum - but it's set in 2429
Storyteller's Drops (2035-2250)
"Before the chaos, most of the world's libraries and archives had been converted into digital formats. Paper books became antiquated and though cherished by many, the production and distribution of book editions had diminished to a trickle and completely ceased more than a decade before the disruption. It is obvious to us now during the event of 2026, we lost nearly the entirety of human historical record. It was no small tragedy that most print paper had already become uncommon, but compounding this problem the electricity used to run all other informational archives both public and personal disappeared almost overnight. Unaware of the scope of the unfolding events anything that could be burned for warmth or cooking was used for survival, including most of the remaining books and paper.
"For as many who wandered looking simply for food and clean water there were as many in shock that their lives, location, and history had been erased. Individuals and then groups became recognized for their ability to remember and re-record the history of collective memory among the survivors. Traveling storytellers became an instrumental part of community life. The arrival of those reciting their personal and handed down memories was met with excitement and anticipation.
"Many storytellers would travel with lightweight banners often painted with a list of authors or stories they were keen to perform. Sometimes these selections were an assortment of fragmentary works, with others the oeuvre of specific authors might be the focus, or single works of literature that would be recited over many nights. Central meeting places became a social hub of storytelling, music, shared communal knowledge, and history." 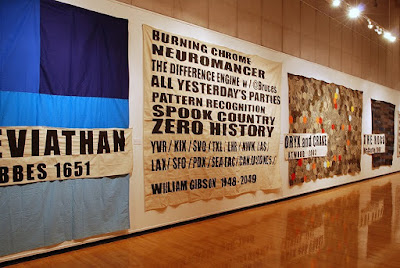