Skip to main content
May 12, 2010
I received this friendly email from local resident John Jennings after my talk in Noosa Library on the Sunshine Coast. His friend John Hartley produced Countdown, the hugely popular Australian equivalent of Top of the Pops. Also in the audience was a woman in her 80s who said she found new technology baffling these days and didn't think she would be using as iPad, even though she worked on Australia's first computer - by which I think she meant this: http://www.csiro.au/science/CSIRAC.html 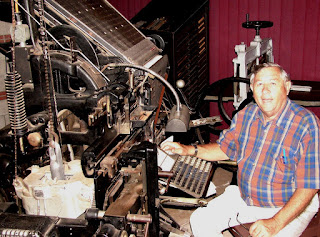 My friend, John Hartley, ex-ABC producer, enjoyed and was stimulated by your talk at Noosa yesterday after I encouraged him to attend.

I have completed 50 years in journalism, starting with hot metal on a Victorian country newspaper (e.g a newspaper in country Victoria!) so I am only one step removed from Caxton - in fact in 1959 we actually used wooden type faces for setting up our hand-cranked posters. Some of our journalists thought one of our posters RECORD SALT HARVEST rather over stated economic reality!

I have been asked to give a talk to the local writers' group on how to prepare a Media Release and I will be demonstrating the wonderful list of items which can come from the one basic release - direct mail, leaflet, brochure, speech - the list goes for ever. The simplicity of Copy a Document on Word is the key! No more key striking.

Being brought up on broadsheet newspaper, that habit dies hard so all the up-coming electronics such as e-books, e-tablets and so on do not excite me but I note our son, 40, has never picked up a newspaper in his life, but uses TV, net and magazines for his info.

That said, my word processor and Google are like Gold to me. Also, being a journalist, filing comes hard, so the use of my computer to place everything in an orderly system for instant recovery any time exceeds Heaven.

I am pictured sitting at a linotype in our local museum.

Best wishes during your stay in Australia.
Email Post