The HOTBOOK is a mini social network, stitched together from cardboard, tape and bits of found technology and sent back in time via the TSPoser from the far flung future.
Originally designed by Chris Wilks in Moodle form, the project was extensively piloted in three schools after which we asked Anna Pitt to make a version which could be downloaded by schools to sit on their server. The HOTBOOK contains new writing by Kate Pullinger and Chris Joseph, Naomi Alderman and many more, beautifully realised in different digital forms by Toni Le Busque. Following feedback from schools that they wanted more ideas on teaching activities to use with each Litch Bit, a brilliant guide has been created by poet Daljit Nagra, if:book's Sasha Hoare and Queensbridge school's Jo Klaces and Ellie Clarke. 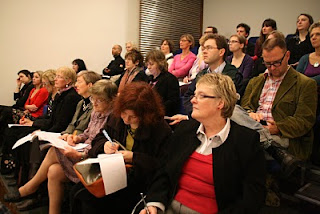 Wendy Cooling is a children's book expert and the originator of the Bookstart scheme; Cory Doctorow writes science fiction and contributes to one of the most popular blogs in the world.
Both were at the launch of our major education practice, which is pleasing as the HOTBOOK hopes to build bridges between page-loving teachers and students focused on the networked screen. 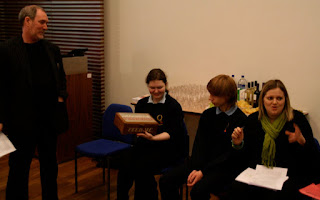 Students and staff from Queensbridge School Birmingham talked about their favourite litch bits and showed off the box they found when the first message arrived from the future asking them to help create the Museum of the History of the Book. 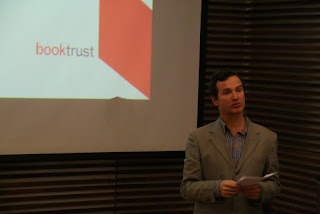 Roland Marden, Head of Research at Booktrust, talking about the success of the HOTBOOK with boys and 'lower ability' students 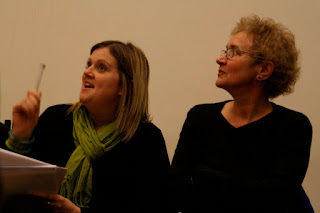 The wonderful Eleanor Clarke, Head of English, and Jo Klaces, Creative Agent at Queensbridge talking about the impact of the HOTBOOK on her students of all abilities, including the two utterly brilliant young people who spoke at the launch about how much they liked Toni's film of Wilfred Owen's Dulce et Decorum Est and Cindy Oswin's Chaucer remix in particular. 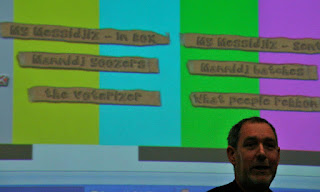 I was delighted to be able to announce that Everythingweb.net is generously providing hosting support for the project - and over 340 schools from the UK and around the world have already registered interest in downloading the HOTBOOK which is currently being tested in a small number of schools and will be freely available from our website in the next few weeks.
Photos by Hattie Coppard. More to follow
******
Interesting post from Martyn Daniels with solid information on the eye strain question. Here's an extract.
"Finally we have the battle between backlit LCD and eInk and the claims and counter claims on the health effect of screen technology. The recent Taipei International Book Exhibition saw several companies promoting LCD devices aimed at schoolchildren. We have already seen many initiatives to ditch textbooks and go digital in education. LCD screens are less expensive than e-paper screens and obviously offer full colour and multimedia and the new iPad also has an LCD screen. The American Optometric Association finds the tie between eye strain, blurred vision, headaches and neck pain and LCD inconclusive and based on current evidence it is 'unlikely that the use of VDTs (video display terminals) causes permanent changes or damage to the eyes or visual system.' " 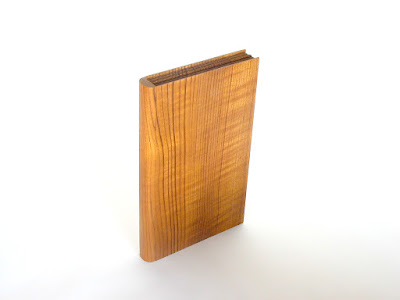