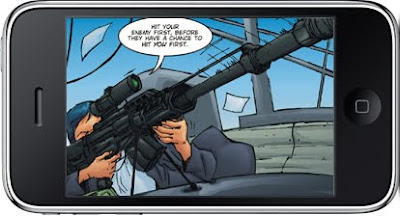 The Carrier, a complete original graphic novel by author Evan Young, is now available worldwide. This marks a watershed moment for the American comic book industry: The Carrier is the first graphic novel to be published exclusively on the iPhone.

"For the first time, a complete original graphic novel has been published exclusively on a mobile device in the United States," says Evan Young, creator of the story and co-founder of StopWatch Media, the company behind The Carrier. "This is not simply a single-issue comic book or a graphic novel that has already appeared in print and been repurposed for the iPhone. The Carrier is a complete, original graphic novel published first and only on the iPhone, integrating the iPhone's core technological capabilities into a creative storytelling experience," he says.

I was kindly sent a code to get a free download but sadly it won't work on my stillunupgradediTouch, which is a shame as it sounds right up my street.

I have just downloaded the iphone app. for children's books produced by Winged Chariot, which looks exciting.

Then there's some interesting work being done by what will sadly be the final crop of MA students on the Creative Writing & New Media course at De Montfort.

"Gizmo the Geek is an eco-freak. He loves all things green, even jelly beans. He is mad about reducing waste and together with his friends, Yolanda and Bertram, he goes round collecting up materials from rubbish bins which he then recycles or up-cycles or just hoards until he can find something useful to do with it.

The Gizmo the Geek project is aimed at teenagers and takes advantage of the power of social networking to spread the word about the ‘Reduce, Reuse, Recycle’ habit.

Gizmo’s first major project is to publish a book of eco-tips. The unique thing about Gizmo’s take on being green is that all his tips cost nothing – absolutely nothing. Green living shouldn’t be a luxury, it should be the norm, and it is not right that choosing the green option is so often more costly than the non green alternative. Gizmo wants to spread the message that going eco can be done for free."

Take a look at the site: http://gizmo-the-geek.net

Terry Gibson's site is an intriguing memoir of a movie-loving life.
http://www.escapetothecinema.moonfruit.com

"My Escape was a twelve screen multiplex, purpose built by cowboys to be a cinema with major design flaws. From the front doors you entered the foyer where there was a small island of a Box Office in the centre of the room, adrift in a sea of blue carpet."
Email Post