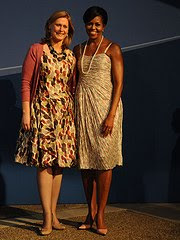 Despite the woes of her husband, Sarah Brown's rise to prominence on Twitter (where she's now more followed than the beloved Stephen Fry) has been spectacular. Sarah has been a good friend to if:book, as she has been to Booktrust and many other charities and causes, showing considerable interest in if:book's mission and activities. A few weeks ago I sent her a message via Twitter asking if she would like to hear more about what we're doing for digital Britain. She replied, personally and positively, within five minutes.
Email Post