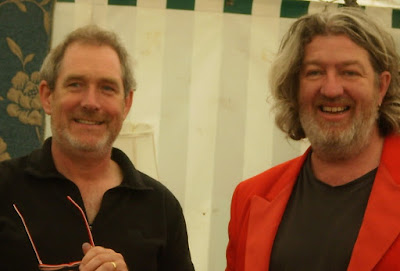 "The proposed settlement between Google and US publishers must be resisted, argues Bill Thompson


if:book associate Bill Thompson (pictured above at the if:book event at the Latitude Festival) has been speaking out about the begooglification of literature in his BBC column.

"Google is in the middle of a massive project to scan and digitise every book it can get its hands on, whether old or new, and if it gets its way then the US courts will soon endorse an agreement between the search engine giant and the US book industry that will allow it to do this without fear of prosecution for copyright infringement.

Authors and publishers will get some money in return, and we will all benefit from the improved access to digitised books that Google will provide.

The deal sounds like a good one, but not everyone is happy with it. The Department of Justice in the US has begun an investigation to see if it is anti-competitive, and last month a number of library associations got together with Amazon, Yahoo! and Microsoft to form the Open Book Alliance which argues that it should not go forward."

Meanwhile at BOOKBRUNCH Google gets it for the messiness of their metadata.

"Books published in 1899, according to Google's data, include Raymond Chandler's Killer in the Rain, The Portable Dorothy Parker, Andre Malraux's La Condition Humaine, Stephen King's Christine, The Complete Shorter Fiction of Virginia Woolf, Raymond Williams's Culture and Society 1780-1950, and Robert Shelton's biography of Bob Dylan. H L Mencken's The American Language is classified as Family and Relationships. A French edition of Hamlet and a Japanese edition of Madame Bovary are classified as Antiques and Collectibles; an edition of Moby-Dick is labelled Computers; The Cat Lover's Book of Fascinating Facts falls under Technology and Engineering."
Email Post
Labels: google