A place that makes you go “aaaaaaaaaahhhhhh” again 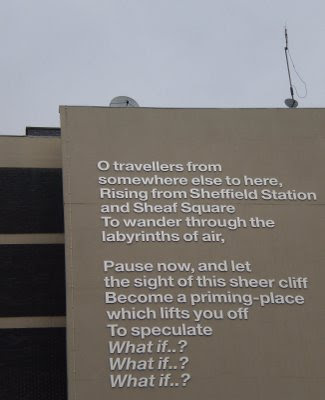 Here's my article written for Sarah Butler's www.urbanwords.org.uk and the basis of my talk next week.


In 1991, Tom Pickard made a film for the Arts Council about fellow poet Roy Fisher, in
which Fisher states: “Birmingham's what I think with. It's not made for that sort of job, but it's what they gave me.”

I lived in Sheffield for twelve years and thought a lot with that city, but, visiting now, I find the place baffles me. So much redevelopment has taken place, so many new squares created, familiar buildings renovated beyond recognition, routes redrawn. Many landmarks have gone completely – like Arundel Gate, known locally as the Hole in the Road, its demolition celebrated at the time in a witty poem about bags of its nothingness being sold off in the nearby supermarket.

Now Andrew Motion’s ode welcomes me as I walk into town from Sheffield station.

Of course when I visit I’m not really thinking about architecture, but about the time I spent there, what ifs included. City centres are made of concrete, glass, steel… and consciousness.
We each use these buildings as screens onto which we project our personal thoughts and
concerns.

I made that metaphor real in 1998, when I was commissioned, with public art and playground design company Snug & Outdoor, to make a temporary installation as part of a programme of public art works in Hackney. The project involved interviewing lots of people who lived, worked and walked about in Morning Lane, Hackney. Our starting point was to ask people where they went in their heads as they passed through. If I could click on this passer-by, where would their hotlink lead – to memories of an old affair, or plans for a future holiday?

“…Sirens. Lots of buses.
Ravel’s Bolero on the stereo.
Drove the wrong way down a one-way street, but the police didn’t notice.
I park by the Town Hall - got married there two years ago,
went to Brighton on a one day honeymoon, then to Southend On Sea.

Today the weather was warm; it’s OK here. I’m a Westerner now.
I haven’t any wish to live anywhere else.

I made a poem from snippets of these interviews and we projected a looped tape slideshow of local memories, stories and reflections onto the windows of a small brick fish stall, renamed the Imagination Station, outside Hackney Central Station.


In the 1980s, community arts organisation, Yorkshire Arts Circus, made books in a day using Amstrads and offset litho printing. Quotes were gathered from people in a library or community centre, the names of contributors credited in one long list at the back of the book and all of them were invited to a launch party. The editors were on the look out for stories and interesting facts, but more importantly for those turns of phrase which give an anecdote colour and personality, like the line which became the title of a book about photographer Jack
Hulme: “He’s world famous round here.”

Over the years I’ve adapted this technique in my consultation work with Snug & Outdoor. I make group poems with local residents and children, in which I aim to include comments from as many as possible, to create not so much a snapshot as a thought bubble revealing what’s going on in their minds.

Consulting with the public is an obligatory part of the design process but how can a
community imagine new spaces without reverting to the safety of the familiar? And we all know how annoying it is to be asked for our opinions by people with clipboards when nothing ever seems to come of what we say. A poem is an end result in its own right; it can be performed out loud by a class at the end of a school day, turned into a poster on display at public meetings, published in the local paper… and sometimes even etched into the fabric of whatever finally gets built.

When I’m dead and buried I know one poem of mine will linger on. Evergreen Park in
Hackney has carved into it a text I wrote in a morning with children from a nearby primary infant school, a lyric as psychedelic as Lucy in the Sky with Diamonds.

In Everseen Park we hide
and seek for electric spark,
do stunts, freeze time,
being invisible in the world.


Sat on Blue Mountain
eating brown buns, we spy
gladiators in the daffodils,
talking trees with minty leaves,
slithery snakes and rubbery ladders,
hopscotch on a trunk of oak..


In Purple Park be still.
Beneath our feet Infinity Green
in Evergreen Square
rolling over and over.

Sadly, planned new buildings and parks sometimes don’t get made at all. There’s no sign yet of a new Children’s centre for Kings Cross, but the group of teenagers whose opinions were canvassed did enjoy the visit to the Bloomberg Building which we arranged to inspire them.
The poem we made together was a blast to perform; it also speaks volumes about what the young people felt such a building should represent.

…I am The Centre.
I stand tall.

You can see through me.

I'm saying:
"Hope for a brighter tomorrow!"
"Test all your senses!
"Is it possible for a building like me to be this cool?"

Then there’s a proposed park in Southampton, named The Spark Park by children from Cedar Wood Special School, and aiming to set new standards for inclusive play. This extract from our poem may not be great literature, but it gives a clear reflection of students’ fears and excitement, and the whole piece is stuffed with their own images of what fun feels like.

“Dreaming
I flew all around the world with no help on my own
Dreaming of the gates of the garden of play
You think: will I dare to go in there?
Is something going to bite me?
Will I feel something sticky – yucky,
What the heck!
It’s ok – it feels good inside
Familiar, like home but not.

How do these texts influence the final designs? Indirectly but fundamentally. The poems are part and parcel of the experimental process. With local people, I’m making a style guide of colours, stories, textures and feelings to provide a source of inspiration to the developers, visual artists, designers and planners. I’m picking up on frustrations and aspirations, some of the history of the area and the preoccupations of its current inhabitants. The writer can garner opinions on local issues and community tensions yet rise above them, developing conversations on the basis of having influence on but no ultimate control over the final scheme.

Of course poets could also be employed to be nice to grumpy local residents and produce text that’s far cheaper than bricks and mortar and so vague that nobody can tell if it’s influenced the final designs or not. But then poets are pretty good at standing up against such cynicism.
Trust between commissioner, designer, writer and community is essential.

Last year Snug and Outdoor and I worked closely together on a consultation exercise leading to the design of a play park for Dublin Docklands Development Agency. We involved children and some very sceptical local parents concerned about the constraints on young people’s play. The final design was much more exciting than the bare football ground parents had initially demanded. It included gigantic brightly coloured tree shapes based on plasticine models made by the children, a climbing wall which provided a contained outlet for vigorous physical risk-taking, and lines from the poem we’d made carved in the wall. Sadly, the recession struck before the play trees had been made, but the poem and many other features are in place now beside smart hotels and community housing.

So what skills do writers need to work in this field? That depends, as there’s such a
continuum of possibilities. My experience and interest is in providing a channel for
community voices. I reckon it’s important to be diplomatic in a dynamic rather than passive way, to think on one’s feet, to be able to engage and inspire people of all ages, to listen well for real meaning and quirky idioms, then quickly turn these into words that have some depth and bite as well as perzazz. But it is also possible to find ways for poets whose strength lies in their literary talents and knowledge of a place, rather than in their skills at facilitating community engagement, to create great writing that has lasting value for a place.

When I was Director of the Poetry Society we ran the lottery funded Poetry Places scheme, which included a mass of public residencies and commissions. We put Benjamin Zephaniah to work alongside Michael Mansfield QC; Simon Armitage wrote a 1,000 word millennium poem for the Dome. Simon’s piece, Killing Time, was broadcast on Channel 4 on the last day of the 20th Century. Tobias Hill was in residence at London Zoo and Sue Hubbard wrote a public poem which can still be seen in the underpass under the IMAX cinema. These kinds of residencies have a life of their own, with writers of substance exploring themes and communities on many different levels.

In 2008 I set up a new charitable company called if:book, a think and do tank exploring the potential of new media for creative reading and writing.

With Snug and Outdoor we’re currently working on ideas for an adventure playground in
Wisbech, with digital artist Toni Le Busque animating the words of local stakeholders for a website to inspire community discussion.

In future it would be wonderful to have a longer term residency in an area affected by
change, so that a small team of writers and makers could work in schools, project images on walls, make writing with communities online and off, and produce some lasting pieces of public digital art, exploring the new media means available to reflect local consciousness amidst the concrete and steel.

How easy is it to elicit poetic responses? There are tricks. I have a set of poems ready to open up minds to playful possibilities. In particular I introduce the idea of kennings, names based on the Nordic tradition of putting two words together - like ‘fire water’ for spirits, ‘head splitter’ for axe. Then once I’ve stirred up the elements of the spell I hope imaginations will alight, and they do eventually. It’s a wonderful moment when someone opens their mouth and says something brilliant, like the woman in the pet shop in Hackney who began reminiscing about “when horses grazed on Morning Lane” and told us about the weird pets owned by people in the locality.

Then there was our project to redesign a mobile library in Windsor. I did all my wizardry with a classroom of children and asked, “So - what is a library?” A boy raised his hand, straining to be picked to answer.
“A room with books in?
Yes – yes that’s good but… The next few answers were just as prosaic.

Then a girl cried out, “It’s a brainsparkler!” And we were off.