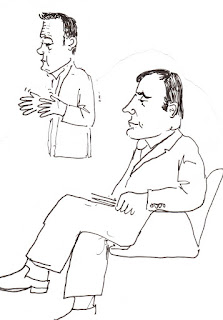 At NESTA this morning I heard Andy Duncan, CEO of Channel 4, give what was heralded as a major speech on the creative economy, his attempt to influence the forthcoming Government paper on Digital Britain. I'm not attuned to TV-executive-speak, and there may have been radical messages hidden in his plea for investment in broadband and his resistance to being merged with Channel Five or, even worse, the BBC (commercial and public bodies being, he feels, "like oil and water"), but nothing leapt out at me.

He did talk, of course, about the importance of the creative industries to our national future, citing the excellent Slumdog Millionaire as a current global hit made by Britain in India. He didn't mention that it's based on a novel, and his broad vision of the sector failed to mention our writers and publishers whose produce is often the inspiration for further products in more commercially rewarding media.

We need an Imagination Strategy for the UK which goes beyond territorial battles ad the obsession with platforms before content, and starts with the individual citizen's need for entertainment, education, inspiration and vision, then looks at what's needed to generate the creative stuff that can give them this, and then at the industries, traditional, converging and newly emerging, that we need to support and amplify that work in a global and digital world.

The digitial divide which Andy talked about is as much to do with attitudes as kit.
With or without wireless broadband, how many of which generation and class are confident in using new technology to further their work and play? What mix of education and infrastructure helps our creative minds think freely and playfully across different media platforms to come up with the brilliant ideas that are the real income generators of the future?

Channel 4 are thinking outside some of their boxes, launching their 4iP fund for new media projects and changing the parameters of what TV channels do in a converging world. Can the literature sector open up channels to engage with them about how we promote and inspire the best possible words in the best possible order?
Email Post
Labels: 4ip nesta strategy