you crane towards this small square of white light...

What's the chance of getting public libraries to make a bold leap into the future, with local libraries becoming genuine local 'myspaces', a meeting point for all sorts of networks and interest groups?

I've been asked to join one of the teams currently being consulted with by DCMS to draw up a plan for public libraries in the UK. That invitation led me to look back at my notes from last autumn when, thanks to support from the Mellon Foundation, three high level meetings on The Really Modern Library took place in London, Los Angeles and New York, organised by the Institute for the Future of the Book with the goal of shedding light on the big questions about accessibility and usability of analogue culture in a digital, networked world. I attended the London and New York meetings and these are some of my notes from those sessions.

The starting point was the idea of a design competition around ways of making digital archives.
In London, Kerry Facer of Futurelab compared the idea with the search for Longitude in the 18th Century when thousands of lives were being lost at sea due to the inability to determine an east-west position. The quest to find a solution to this problem was long and complex. In the 21st Century the internet offers the opportunity for all to freely access the richest storehouse of knowledge, but what needs to be done to ensure that the web creates free thinkers not passive consumers?

As Clive Izard of the British Library put it, if the Internet provides access to a global digital library, what constitutes the reader’s ticket - what toolkit of training and/or technology will empower readers around the globe to use this astounding resource with confidence and seriousness, on their own terms? Search engines help us locate items, but there may be another axis by which to map intellectual journeys which could lead to real discovery.

The range of suggestions forthcoming shows what powerful questions we were discussing. For a digital author like Cory Doctorow the answer was bound to be some kind of web based tool that might give an extra dimension to our exploration of the digital, for instance a plug in application for the Firefox browser that showed exactly who owned each site visited was one inspired idea.

A recurrent theme was the issue of copyright and how producers are monetised in the age of free information and imagination. Cory Doctorow’s solution was a tax to be levied on the cost of an internet service provider which would fund the writers and makers of non commercial content. 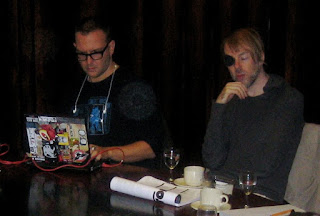 doctorow & momus
Another participant, performance artist and musician Nick Currie, aka Momus, wrote in his blog: “Basically, my argument was that, while I appreciate the internet, I can't forget McLuhan's idea that the medium is the message. I worry that our windows on the world are getting increasingly ephemeral, and that each one of them is just a series of circular, self-legitimizing metaphors. While I appreciate the net and especially Google's ability to answer just about any question we have, it's the (largely unseen) framings that come with our current metaphor set -- the proscenium arch of the computer screen -- that disturb me. Imagine a cat or a rabbit watching you surf the internet: your body is rigid, you crane towards this small square of white light. For the rabbit, you're being very stupid and boring.”

In New York the presence of artist Laurie Anderson and several key figures from the library community led to further discussion of the essential nature of a library. If it will soon be possible to carry all written knowledge on a memory stick in your pocket, do we need a new kind of public space where we can go to focus on our area of interest. 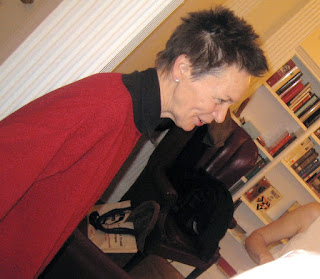 The silence of libraries can be oppressive and intimidating or contemplative and librating. How do we cut ourselves off from the information bombardment of modern life to experience the stillness many associate with libraries, freeing the mind to concentrate and ‘walk around’ artefacts and ideas? 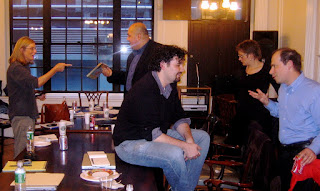 hot debate about the really modern library
Will the young owners of $100 laptops receive the portal to a shopping mall or the keys to freedom of thought and expression? This is as important a question for our times as the problem of longitude three centuries ago.
Email Post
Labels: libraries

dumbledad said…
Wow - Cory Doctorow and Laurie Anderson were there. That must have been quite an amazing discussion.
24 October 2008 at 12:05