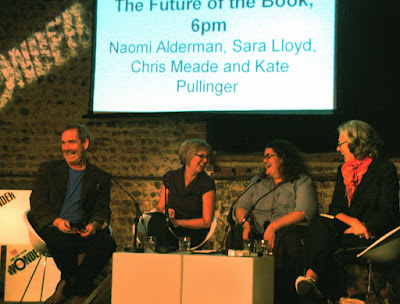 Sara Lloyd, Head of Digital Publishing at Pan Macmillan, authors Kate Pullinger Naomi Alderman and I were suffering somewhat from futureofthebook overload, but on friday night my panelists did a fantastic job of entertaining an interested audience at Small Wonder, the perfectly formed festival of the short story now in its fifth year at Charleston, once home of Virginia Woolf. It was exciting that we all felt on the same e-inked page: interested in the eReaders as a new means to read conventional books, but more inspired by the possibilities of new kinds of literature which exploits in the future. I've never been entirely convinced that I want as a reader to be able to decide the fate of the characters in the book I'm reading, but Naomi articulated very well the thrill for her of being part of the plot.

When an audience member suggested that on-screen reading might be anti-social and stop personal interaction, the panel rose as one to argue back. Naomi talked about friends who had met their partners in the midst of Alternate Reality Games and through fan fiction sites. What a thought - imagine falling in love with someone you met in Middlemarch or... well, what book would you choose?
Email Post
Labels: festivals fiction short story smallwonder