There's an interesting blog post in the Guardian about the state of e-literature, written by Andrew Mannix of 3AM who asks if e-literature, by which he means born digital fiction and poetry, is dying as an artform as conventional publishing moves into the download.

He writes: "When I first ventured online, the internet struck me as the last word in literary experimentation. I was in good company. For Kathy Acker, and other pioneers who were already pushing the envelope on papyrus, cyberspace (copyright William Gibson) was truly the final frontier.

The very first novel to be serialised online - Douglas Anthony Cooper's Delirium (1994) - made full use of the new medium by allowing readers to navigate between four parallel plotlines. Geoff Ryman's 253, first posted in 1996, became an instant hypertext classic. A year later, Mark Amerika's Grammatron transcended the fledgling genre by turning it into a multimedia extravaganza. This, I believe, was a crucial turning point. The brief alliance between literati and digerati was severed: groundbreaking electronic fiction would now be subsumed into the art world or relegated to the academic margins." 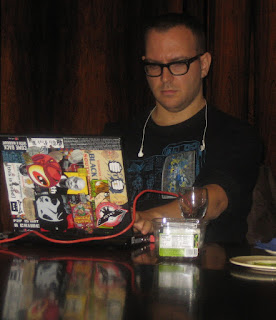 There have been massive changes in technology and society since then. The poets of hypertext and storytellers of flash make work with software and for devices that are being constantly updated, the comfy, culty corners of cyberspace have been flooded by the tidal wave of the mainstream. Now the page writers are being uploaded to the cloud of digital literature. And so it gets harder to seperate e-life from the rest of reality.

Remember when fax machines seemed magical and people stood above them in offices watching documents emerge? A poet who then only wrote work for the fax would look way out of date by now, but having focused on the particular affordances of that gadget such a writer is likely to have moved with the times and seized on each new gizmo since. Having said that, there's no doubt a fax poetry appreciation society somewhere on the web - I don't dare google it to check.
Email Post
Labels: ebook guardian literature